Any adults or colts of 15 and over who can’t attend the session allocated above should contact Brian Dawbarn (brian.dawbarn456@btinternet.com) to discuss possible alternative arrangements.

Any boys or girls aged under 15 who can’t attend the session allocated above should contact Tom Osbourn  (j6tco@sky.com) to discuss possible alternative arrangements.

The resolutions to be considered at this AGM have been emailed to all members.

If you have not received this email please contact secretary@rayleighcricketclub.org.uk

It was with great sadness that the Club learnt of the death of Brian Emmett in October 2019 after a lengthy battle with cancer. Brian spent 7 years at the club at the end of the 1970’s through to 1985. He held prominent positions every year, from Youth Team manager in 1979, 2nd XI captain in 1980, 1st XI captain in 1981 & 1982 and finally Sunday XI captain between 1983 and 1985. The bare facts of Brian’s Rayleigh career read in excess of 1700 runs scored from 180 innings with a top score of 66 and 250 wickets from 1300 overs at the highly respectable average of under 17 runs per wicket. His best season with the ball occurred in 1982 when he took 69 wickets at an average of 12.92 and claimed the Bowling Cup with figures of 8-65. What was more remarkable was that he had changed his bowling action that very season, replacing his military medium pace with slow right arm. Brian often defeated batsmen with his wily use of flight and lack of pace, but certainly not with off-spin as he never spun a ball all season !! He was also a key member of the Mid-Essex Division 2 winning side in 1984.

Brian was a true character in every sense of the word. He had a multitude of stories that would captivate and amuse (though none that can be repeated here !) especially the younger players fresh out of school/college. He was certainly in his element during the 1981 tour of Devon reducing poor Malcolm Sparrow to tears over a fake flat tyre “incident” and during the 1984 tour to Bath. He always seemed to have a permanent tan and on one occasion was consoled by the home umpire at Chignal who apologised for having to give him out lbw. Unfortunately the player in question given out was none other than our local Pakistani newsagent Mohammed Khaki !!

Brian’s true legacy though was with his development and mentoring of a host of young players who have gone on to serve Rayleigh CC with great distinction. Phil Wolff, Andy Thurogood, John Wright, Willie Leadbeater and Tony Catling were all taken under his wing and very much looked upon Brian as a mentor/father figure at the time. His great belief in their talent and ability was without doubt paramount in them not only becoming major players at the Club but probably ensuring they remained at Rayleigh CC in those formative years. At the time Rayleigh was well served with a number of senior players who will always intrinsically be associated with Brian, including Chris Baker, Jim Harding, Ralph Adler, Stuart Pinkerton and Harry Walker, Brad’s dad. It’s fair to say that their like will probably never be seen again and in the subsequent 35 years certainly never replicated. Brian was also highly instrumental in the staging of the popular and successful traditional summer Barn Dances held at David Pinkerton’s Lubards farm where over 350 people would be in attendance.

Some of us were fortunate enough to meet up with Brian and his son Darren when they popped over to watch the 3rd XI at Woodham Mortimer a few years back and it was great to see him once more as he had moved down to Cornwall over 20 years previously. He will be greatly missed. 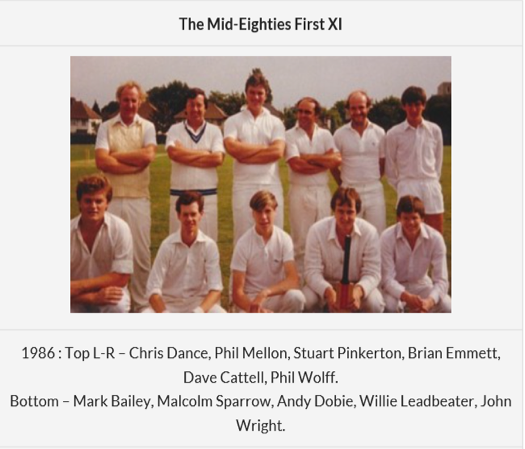 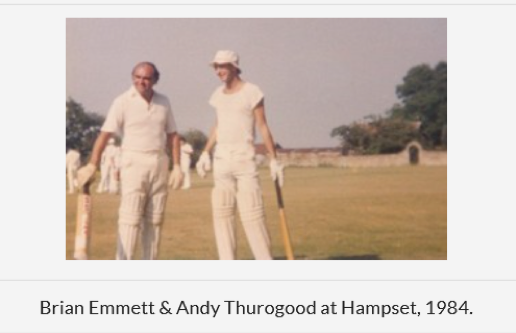 Another disappointing weekend with a distinctly end of season feeling to it with only one win and five defeats for our Saturday league sides with nothing to play for in terms of possible promotion or relegation.

T Rippon Mid Essex Premier Division.  The 1st XI entertained high flying Rainham 1st XI and batting first were bowled out for 119, only Shaun Du Plessis (24) making any impression on the scoreboard. The visitors passed the target in the 25th over for the loss of two wickets. A disappointing end to the season finishing in 5th place in the Division.

END_OF_DOCUMENT_TOKEN_TO_BE_REPLACED

A rather disappointing weekend with two wins and four defeats for our Saturday league sides and with one week of the League season to go the 2nd XI are relegated to Division 3 but all other teams are safely in mid table.

T Rippon Mid Essex Premier Division.  The 1st XI went to play Canvey Island 1st XI and batting first scored 205-8, Jason Ox (57) and Matt Verrinder (29) leading the scoring. This seemed a defendable total but Rayleigh found wickets hard to take and the home side passed the target in the 44th over for the loss of two wickets.

END_OF_DOCUMENT_TOKEN_TO_BE_REPLACED

Another weekend of mixed fortunes for our Saturday league sides with two wins and four defeats.

T Rippon Mid Essex Premier Division.  The 1st XI went to play bottom of the table Great Totham 1st XI who batted first and were bowled out for 97, Mark Acraman taking 5-37, Sean DuPlessis 3-37 and Ian Turnbull 2-5. Rayleigh knocked off the required runs in the 21st over for the loss of two wickets, Toby Turner (34) and Andy Impey (24*) top scoring.

END_OF_DOCUMENT_TOKEN_TO_BE_REPLACED

All games this week were cancelled due to the poor weather conditions.

A weekend of mixed fortunes for our Saturday league sides with three wins and three losses.

T Rippon Mid Essex Premier Division.  The 1st XI went to Chelmsford to play top of the table Springfield 1st XI and losing the toss were invited to bat on a damp pitch under cloudy skies. These conditions proved ideal for the best bowling attack in the League and Rayleigh were reduced to 39-8 and were bowled out for 54 in the 22nd over. The home side knocked off the required runs in 8 overs but lost 3 wickets in the process. This was a disappointing end to a good run of victories.

END_OF_DOCUMENT_TOKEN_TO_BE_REPLACED

Much improved availability and a better week with three wins, a tie and two defeats for our Saturday league sides.

T Rippon Mid Essex Premier Division.  The 1st XI travelled to Stock 1st XI and batting first amassed 289-7 Dan Frost 121 and Mark Acraman 38*.  This appeared to be a winning total at tea but with some wayward bowling conceding more than 50 extras and small boundaries the result was in doubt for much of the home side’s innings.  In the event Rayleigh squeezed home by 22 runs. Dan Frost taking 3-22 and Ian Bryant 3-44.